In 1955, a team of intrepid adventurers set off on The Oxford & Cambridge Far Eastern Expedition- an incredible 16,000 km journey driving from Singapore to London, funded by Land Rover. In August 2019, a team are set to recreate the infamous route and raise funds for Walking With The Wounded.

Driving the original 1955 Series One Land Rover (‘Oxford’), Tim Slessor-one of the original team members will join Alex Bescoby and others in remaking history. This time, the team will forge the path through some of the densest jungles, highest mountains and most arid deserts on the planet.

The team left Singapore on August 25th 2019 and travelled through Thailand, Myanmar, Nepal, Kyrgyzstan, Uzbekistan, Turkmenistan, Iran and Turkey before reaching Europe; eventually arriving in London 100 days after setting off.

Tim Slessor had a formative life experience serving in the Royal Marine Commandos during his British Army National Service in the early 1950s, which is why he is keen to support UK and Commonwealth veterans who need that extra boost after leaving service through Walking With The Wounded.   It was during his time in the army that he first visited Singapore, and formed a lasting bond with the country.

The team has now completed their journey, however, you can see their route here:  https://www.lastoverland.com/ 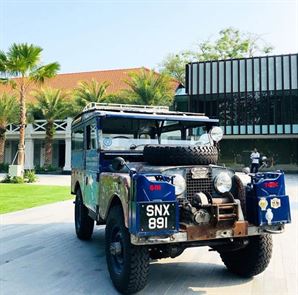 Walking With the Wounded is a Vetrans Charity based in the UK. We support wounded veterans such as those in our case studies