‘Walking With The Wounded found the perfect formula for us. They supplied constant help and there was always someone on speed dial if we needed them. Our NCCP Care Co-ordinator was a saviour! We can’t speak highly enough of her – she sorted out everything we needed – regular mental health support, provisions and, the correct benefits.’

Billy grew up in County Durham. As a boy he had been in the cadets and so, when he left school aged 16, he decided to join the military and became a Guardsman in the Scots Guards. Billy was in the Army for 6 years he was a competent soldier and achieved a good service record.

Billy was deployed to Northern Ireland and to the Gulf War and it was during his time on tour in Iraq that he suffered a crushing head injury. It was his family who first noticed the significant change in his personality – Billy had always been very outgoing, but he had become withdrawn and suffered from nightmares and excessive mood swings. Unfortunately, these symptoms were initially misdiagnosed, and the anti-depressants prescribed by his GP did not alleviate his problems.

Billy was very capable technically and he loved to work on anything mechanical (especially motorbikes!) but he had become unreliable and found it impossible to hold down a job.

When Billy met Ali, they immediately saw ‘something special’ in one another and they were extremely happy together. Ali had two children and at the time, she worked in a secondary school for students with behavioural issues and she understood how to handle sensitive issues and how to deal with mental health problems.

In 1999, Billy and Ali got married, they had a baby girl and things were perfect for a few years until they very sadly lost their second baby. This impacted heavily on Billy and on their relationship - his troubles resurfaced and continued to do so at regular intervals for the next 20 years.

Eventually, Billy was diagnosed with PTSD and was given the correct medication for his condition but as he had been self-medicating with alcohol and marijuana for many years, his mental health had seriously deteriorated.

In 2015, Ali was diagnosed with mental health problems directly caused by the stresses of living in a volatile home environment and then, the following year, she was diagnosed with colorectal cancer and had chemotherapy and underwent several major life-changing surgeries. By this time, Ali had completely shut down from Billy, she was exhausted and seriously needed a break from the stress.

In 2019, Billy had an angry outburst and the police were called. By chance, the police officer who attended the scene was also a Gulf veteran and was sympathetic to Billy’s situation and he directed the couple to the WWTW. Everything was about to change.

The WWTW NCCP Care Coordinator assessed the situation and put together a plan of action. She explained that Billy was really struggling and that he needed constant help and monitoring. It was a moment of realisation and a relief to know that finally there was someone who understood and who could offer support and help lift the burden of their situation.

In the first instance, their Care Coordinator arranged for Billy to receive regular visits from the NHS Veteran’s Mental Health Team (TILS) and she sorted out the family’s benefit claims.

The Care Coordinator also found a way to utilise Billy’s mechanical skills and since November 2019 he has volunteered for the bike restoration charity Recyke Y’Bike based in Newcastle. This work has proved to be particularly positive for Billy’s happiness and well-being.

‘I’ve never seen Billy so happy now that he has new challenges and is able to use his skill sets. It’s like therapy for him.’

As a result, Billy is no longer drinking, using drugs or receiving help for his mental health. He and Ali are now strong enough to support other family members who need their help - their two nieces are both NHS nurses and who both caught coronavirus – Ali and Billy took them food and kept in touch whilst they were ill and in self isolation. Billy and Ali are now motivated in their support for the NHS and appeared in their own WWTW ‘Clap for the NHS’ video.

Billy plans to continue working at Recycke Y’Bike and hopes to take part in a project to repair WW2 vehicles. Ultimately, he would like to use his skills towards some form of paid employment.

The family is now working together, their three children, Sarah, Sean and Katie, are all doing well in life and thanks to WWTW’s support, they are now leaving the past behind and forging ahead.

‘Despite everything that has happened, we have come through it and we are stronger and happier as a result.’

Billy admits that he has found the COVID 19 lockdowns long and tiring. At one point, he had to self-isolate for 2 weeks and was confined to the spare bedroom at home. Understandably, he struggled with this situation but the support from Ali and his children helped him through. To keep his hands and his mind busy, he used his engineering skills to repair broken watches and then either sold them or kept them to wear.

Ali, meanwhile, kept herself busy re-decorating every room in the house ‘giving it a complete makeover’. She now feels able to make plans and is considering some form of volunteer work later in the year.

WWTW is in regular contact to see how they are managing and late last year, invited them to share their opinions on the progress of the NHS High Intensity Service (HIS), a veteran mental health path finder that is being supported by WWTW – something that they were both pleased and proud to participate in.

Both Billy and Ali, still have some outstanding health issues, but they hope that by the summer they will be on the road to recovery. Billy would like to start repairing bikes again and they are both looking forward to being able to go out to see their friends and family. Above all, they cannot wait for the arrival of their first grandchild, a little boy, who is due in March.

Find out more about the NCCP programme here 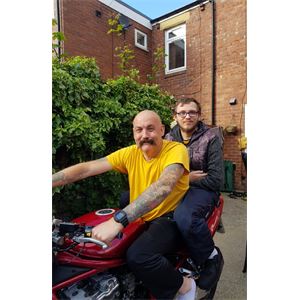 Donate to Support our Veterans!

Donate Now
PTSD can have a huge impact on finding employment.