Walking With The Wounded Clinical Lead Rod Eldridge has been heavily involved in a collaborative project to support Health Education England which has resulted in a series of half and full day training sessions for GPs across England. 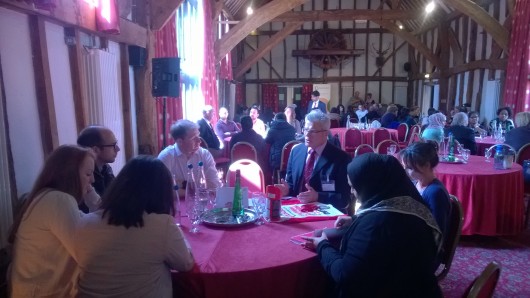 The project, which was launched in 2015, was the inspiration of Brigadier Robin Simpson, an Army GP who is the Defence Medical Services Dean at the Defence Medical Services College for Health Education and Training in Lichfield and also a Senior Examiner at the Royal College of General Practitioners.He persuaded the Royal College of GPs that with nearly 2.8 million Veterans in the U.K (about equal to the number of diabetics in U.K.) GP’s should learn more about Veterans Health needs and how to address them.

Most significantly he also managed to get veterans healthcare added to the curriculum for GPs in training in early 2015. The result is that all GP trainees (who are known as GP Registrars) are now keen to learn about Veterans Healthcare because they know it will come up in the exams they have to take to get membership of the Royal College of GPs.

Rod said: “The educating of GP’s in the cultural sensitives of identifying, recording and sourcing effective support for service and ex service personnel is vital if we are to ensure those who gave their best get the best. WWTW’s programme Head Start has been a major contributor to this initiative, both in terms of lived experience and the provision of significant knowledge and experience surrounding veteran mental health. Head Start has already seen a marked increase in GP referrals which are now our main source of referrals over and above the other well known charities.

This I believe is testimony to the success of this programme of nationwide GP training.”

Early in 2015 a civilian GP trainer and course organiser from Buckinghamshire, Dr Alex Bates, picked up on this addition to the curriculum, and wondered whether more could be done to teach GP Registrars about the subject.

Dr Bates asked her brother Lieutenant Colonel Julian Woodhouse, a GP in the Royal Army Medical Corps if he could teach her small group of GP Registrars about Veterans Healthcare.

From an initial plan to run a half day session for 30 GP Registrars in Buckinghamshire things snowballed. Julian soon found himself being asked to speak to 100 GP Registrars for a day at the Kassam stadium in Oxford.

He therefore developed the current model of training which has so far been delivered to excess of 1000 GP Registrars and GP trainers.

GP Registrars are asked to complete the online e-learning module before the training day and after a 30 minute presentation on Veterans Healthcare they listen to two Veterans describing their experience. Following that they spend 15 minutes with small groups of GPs or GP Registrars, enabling the doctors to gain a better insight into Veterans Healthcare needs.

During the afternoon sessions up to 6 different COBSEO Charities including Walking With the Wounded tell their stories followed by a further ‘round robin ‘when the doctors are able to learn about some of the support available.

The package provides both excellent learning opportunities for the GPs about health needs for Veterans and also introduces them to some of the many service organisations that can help.

Walking With The Wounded is one of about 8 charities who have supported the project with a variety of speakers across the country in 15 sessions run last academic year and a further 15 booked for the academic year 2016/2017.

The sessions are run by Lt Col Julian Woodhouse for Health Education England with Local training leads in co-ordinating the Speakers who have included: BLESMA, Blind Veterans UK, Big White Wall, Help for Heroes, Walking With The Wounded, The Ripple Pond and Combat Stress. Future plans include trying to see if Veterans Healthcare can be added onto the curriculum for The Royal College of Ophthalmology, Psychiatry and even Royal College of Surgeon as well as getting the training delivered up to Scotland ,the North East, South West, London and Wales.