Walking With The Wounded has been named as an IPS Centre of Excellence for Veterans by the Centre for Mental Health for the second time this year, this time for the employment service it provides in Manchester. The award recognises the IPS service provided to veterans by WWTW in Manchester, in partnership with the Military Veterans’ Service (part of the Pennine Care NHS Foundation Trust).

WWTW began working alongside the Manchester veterans' mental health team in January 2016. The aim was to support ex-servicemen and women who were seeking support for their mental health, but who were also unemployed, underemployed or at risk of losing employment.  Since then WWTW has successfully supported 59 veterans into sustainable employment and secured 71 paid employment outcomes.

What is IPS? IPS stands for Individual Placement and Support and it's an approach that Walking With The Wounded use to support people with mental health difficulties into employment. It involves intensive, individual support, placement in paid employment, and time-unlimited in-work support for both the employee and the employer.

There is overwhelming international evidence that IPS is much more effective than other traditional approaches (such as vocational training) in successfully getting people into work. Evidence shows that IPS has the ability to minimise the harmful effects of long term sickness absence, improve quality of life and wellbeing, lead to better health outcomes,promote recovery and aid rehabilitation.

“We are extremely proud to have achieved the IPS status for the North West. We have been working to achieve this status for over a year and the end result has been down to the determination and professionalism of all involved,” said Gary Lamb, North West Regional Lead at Walking With The Wounded. 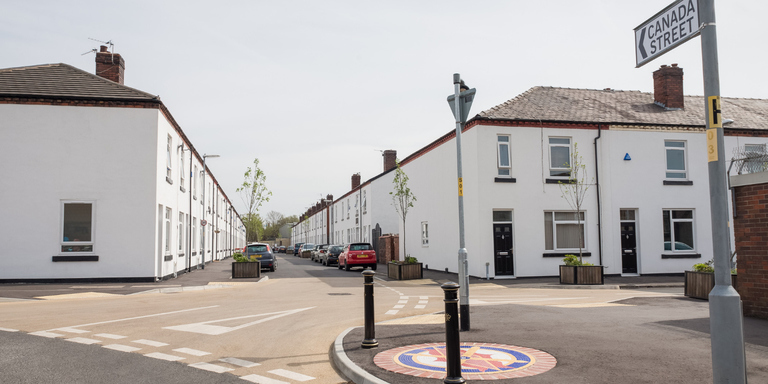 Walking With The Wounded's Manchester office is located on Canada Street, the site of the DIY SOS 'Big Build' in 2015. Click here to find out more.

John Henstock from the Military Veterans’ Service, Pennine Care NHS Foundation Trust also commented: “I am delighted that WWTW and Military Veterans’ Service has achieved Centre of Excellence status. The WWTW Employment Advisor, who is embedded within our specialist NHS Veterans mental health service has developed excellent relationships with local employers and other agencies to support our veterans into meaningful paid employment.”

All of WWTW's Employment Advisors have been trained in the principles of IPS, and where the charity is embedded in mental health teams, the charity is pursuing Centre of Excellence recognition.

Matt from Manchester is a veteran who has been supported via the IPS service. WWTW Employment Advisor, Tom,  explains Matt’s journey...

Matt was referred to me at the beginning of January 2018 for support around gaining and sustaining a job. Matt had not worked for quite some time but had been receiving clinical support from Military Veterans Service, in which he was progressing positively.

Matt had always wanted to be in the Army and did not see a career outside of the military. This made things extremely difficult when looking into alternative careers now that his military service had come to an end.

Matt had been applying for many different jobs; not receiving feedback or being invited for interview due to not matching the skill-set required. Together, Matt and I spoke about his skill-set and Matt’s aspirations and interests – trying to match those from his military career to a new civilian career.

Matt is, and has always been, interested in the security sector and has a vast amount of experience due to his military background. Matt is also very confident in dealing with people face-to-face. A job working as security at a Football Club was advertised and Matt and I saw this as a great opportunity to use both the security and face-to-face contact skills that Matt had.

Matt was successful in gaining this employment and is currently still employed and receiving follow up support.

Matt has had a fantastic turnaround from being unemployed for quite some time and receiving clinical support, to gaining and sustaining employment.

Find out more about Walking With The Wounded's Employment Programme here.

Men are now almost three times more likely to see a therapist than in 2009, according to Mind’s ‘Get it off your chest’ study. This is a move in the right direction although, according to numerous studies, men continue to struggle with mental health in silence.

OP-REGEN and City of Trees

Walking With The Wounded (WWTW), is expanding its national reach with the launch of the new North East Regional Service Hub, in partnership with MySpace Housing Solutions.

Last month, WWTW welcomed Dan Goodbody to the team. Dan will work closely with the London Veterans Mental Health Transition, Intervention and Liaison (TIL) Service to support service users in the London area.