Walking With The Wounded (‘WWTW’) CEO, Edward Parker and a team of veterans are getting ready to set off on a 122 mile trek (almost the equivalent of 5 marathons) from the WWTW North East Hub in Gateshead Civic Centre to the North West Hub based in Canada Street, Manchester. This is in aid of Walking Home For Christmas. The campaign supports ex-servicemen and women who are alone this Christmas.

The group will face freezing temperatures and tough weather conditions as they start the journey on foot, trekking south. They will set off from Gateshead on December 13th at 8am and will walk 10-12 hours per day aiming to arrive in Manchester on December 16th around 4pm. Ed and his team will be sleeping in an RV, which has been donated by Bardsea Leisure, Cumbria. To donate to the walk, click here. 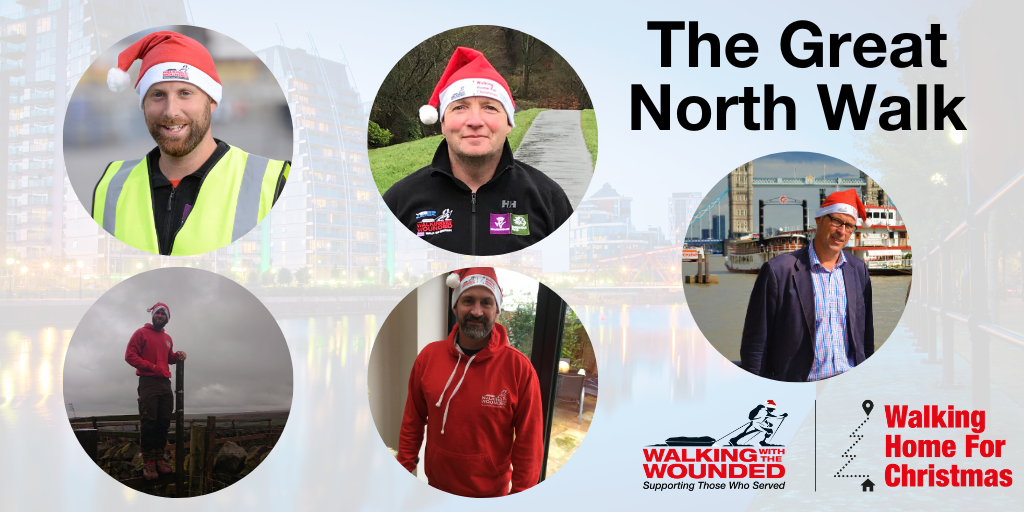 Ed Parker explains why he is taking on the challenge, “This is a symbolic walk between the two Walking With The Wounded Hubs in the North of England. It presents a great opportunity to raise awareness of the vital work that we do, raise money to support those in need this Christmas and walk with some of the veterans who have been supported since the charity was founded 10 years ago. This is going to be quite a challenge and we’d love to see as many people as possible come out and support us on our route to Manchester!”

The team will walk the following route:

A dedicated support team including Paul and Matt, will accompany the team. Paul, who is based in Salford, joined the Royal Engineers at 16 in 1988. After Apprentice College and basic training, he was deployed in the first Gulf War. Paul completed 9 years’ service deploying in Bosnia, Northern Ireland, Canada and Belize.  He left the Armed Forces in 1998 and eventually joined Greater Manchester Police where he served until 2012, “I supported Walking With The Wounded on their Walk of America, Walk of Britain and Cumbrian Challenge. I have reduced mobility, but being a support driver means that I can still take part in the Great North Walk, meet up with other ex-military and support a great cause”.

Matt, who is based in Chertsey, will also support the trio on their walk. Matt, a veteran and amputee who has been supported by Walking With The Wounded, served with the 3rd Battalion The Rifles. He was injured in Afghanistan, and medically discharged in 2009. In 2015, he, like Scott, took part in the Walk of Britain. Matt explains why he is getting involved, “Walking With The Wounded do a tremendous amount to support our wounded veterans and helps to get them back on their feet. I’ve been involved with the charity for a few years now and I want to continue do my bit to give back”.

The campaign invites anyone to register for free, receive a branded Santa hat and do a sponsored walk home or somewhere important to them anytime between 12 -22 December.

The event is aiming to support 400 ex-servicemen and women who are socially isolated, struggling with their mental health, homeless or caught in police custody – and get them back into employment and independence.

Signing up for Walking Home for Christmas is easy and free – just log on to www.walkinghomeforchristmas.com and register for your fundraising pack.