WWTW has a team of 36 runners all undertaking the momentous challenge on behalf of the organisation. The team are set to raise £250,000, which will go towards veteran support.

Siblings, Peter, Harry and Toby are the only trio of brothers to have signed-up to take part in the MdS this year. The brothers are taking on the challenge in aid of WWTW and in memory of Peter’s close friend, Jules Roberts, a long-standing supporter and friend of the charity who took his own life last year.

Peter has not served in the Armed Forces, however, he notes that the Forces has featured prominently in his life with his Father having served with the Gurkhas and because Harry and Toby have both served and another brother is still serving.

The trio had talked about taking part in the Marathon des Sables for a while. Following Toby and Harry’s departure from the Armed Forces in 2016, they started to miss the physical demands and adventure that came with being in active service. It was only when their older brother Peter suggested that they ‘bite the bullet’ and sign-up that the brothers decided it was time. 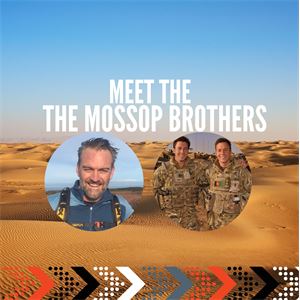 Thank you to everyone who took part in our Longest Day Challenge in collaboration with Brian Wood and pushed themselves further than they have gone before.

This month marks WWTW’s Longest Day Challenge. It challenges you to go further than you have gone before and help to raise money to support veterans and their families. Earlier this month, WWTW supporter, Sarah, took on and completed her Longest Day Challenge, swimming 3 miles in her local pool.

Earlier this month, long time WWTW supporter, Glen, took on his own Longest Day challenge in the Lake District to show his support to those who served.

From tomorrow, Joe Cox, Detachment Commander of the 13 Company Southwest London Army Cadet Force, will take on WWTW’s Longest Day Challenge along with the Army Cadets to raise vital funds to support those who served.