“We couldn’t just switch the lights off” - This was the cornerstone of Walking With The Wounded CEO Ed Parker’s video update delivered to teams who would normally have been taking part in Grasmere, Cumbria, at the charity’s biggest in-person fundraising event of the year.

WWTW had to postpone its annual Cumbrian Challenge, which sees teams of 3 or 4 take on a challenging route around the Lake District, until October, so we created the #CumbrianChallengeAtHome to mitigate the loss of vital income and continue to support the men and women in our programmes.

Thanks to everyone who took part and helped raise vital funds

There was brilliant enthusiasm. The DXC Veterans team, from North East company DXC Technology, tried to match the distance of their route by hiking, cycling or running; the team from Craghoppers (The Crags Squad) all hiked up and down a local hill to match the elevation, and some even took on their stairs at home, including Ashleigh Curwen and Beth Kirkby from event sponsors BAE Systems.

A prizegiving video was broadcast live onto Facebook in the evening, where WWTW CEO Ed Parker publicly thanked everyone who took part.

“For our beneficiaries, [going into lockdown] was a hugely challenging time, and the one thing we couldn’t do is just switch the lights off. We had to keep doing what we do as a charity.

“We’ve brought 220 new veterans into our programmes. We’ve managed to adapt in a way where we can continue to provide the care.

“The only way we’re able to do that is by continued funding, and what you’ve done today will continue to help us make the difference that the remarkable men and women who work in this organisation do.

“Thank you for what you’ve done today – it makes an incredible difference.”

As part of the build up to the #CumbrianChallengeAtHome we hosted Facebook Live videos with beneficiaries Duncan Welton and Shaun Franklin, as at the main event teams hear from the men and women we support at various intervals as well as walking alongside them on the fell.

Shaun, asked how he would sum up the support in a word, said: “Life-changing”. He struggled with PTSD and was unable to take his daughter to play in the park due to nightmares and extreme anxiety but is now, in his words, “able to be a dad again”, as well as build a successful business – Chamber Health and Wellbeing.

There were four categories of prizes offered as a chance to create some healthy competition, with the winners being awarded with a selection of Grasmere Gingerbread. You can see the winners below:

Tsui walked an incredible 20 miles on Saturday with colleague James, and was able to raise an even more incredible amount of money thanks to the generosity of her friends and family. Together, they raised enough to fund a veteran through 12 sessions of therapy through our Head Start programme.

The Institute of Supply Chain Management, led by managing director Jacky Stansfield-Smith, were out in force at the weekend, all taking part in solo walks and raising a fantastic amount of money between them. The IoSCM are new to the Cumbrian Challenge event this year and already well on their way to their £2k fundraising goal for each team – using the event as a teambuilder across the organisation and wider partners. 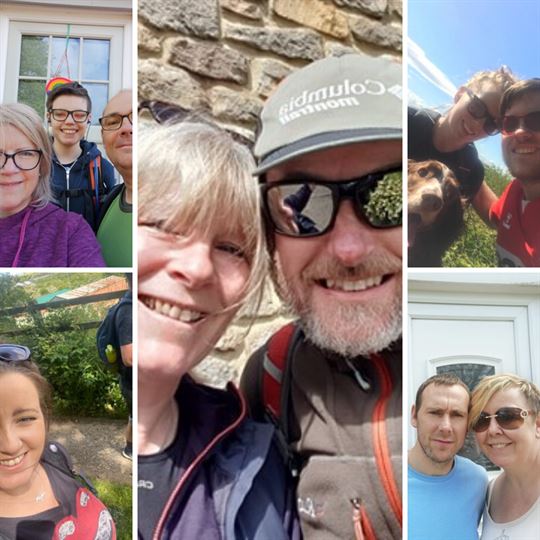 Most elevation in one hour: Dale Eades (Morson)

Dale is a regular face at the Cumbrian Challenge, taking part with Morson’s “Team Apache” every year who cross the finish line with flags flying high. He decided to run up and down his stairs at home to match the elevation of Great Rigg, the first peak on each of the three routes at the event, and within the first hour he had completed an amazing 474m. Well done Dale! His wife deserves special mention for filming numerous Facebook Live videos and taking song nominations in exchange for donations – while also slipping extra counting stones into Dale’s box at the foot of the stairs in return for more money for the cause. 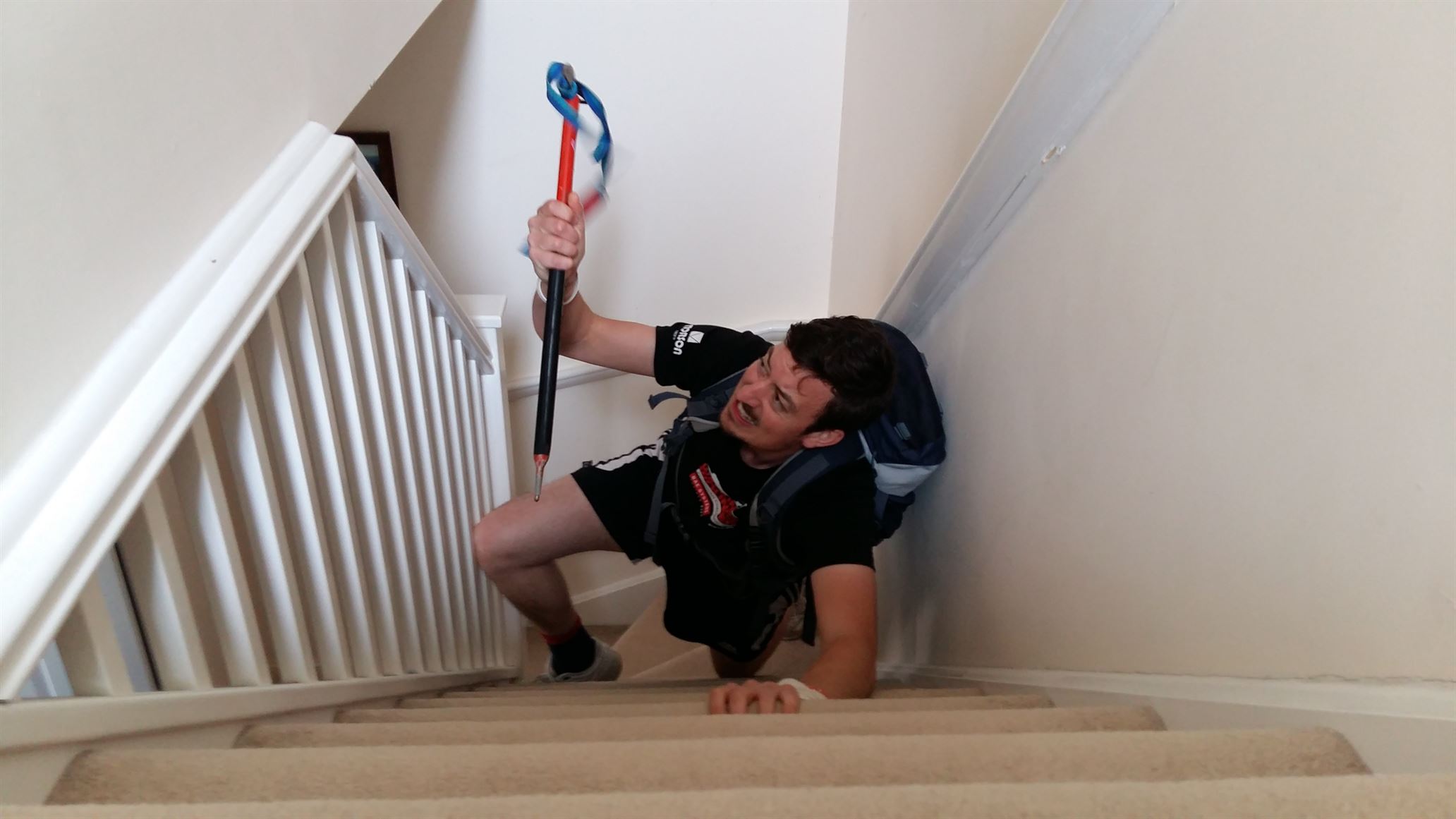 Andrew has been to four previous Cumbrian Challenge events with the communications firm Arqiva and is back for a fifth. He had originally planned to match the distance of his route by walking, running and cycling throughout the week, but unfortunately due to injury on Monday, he was unable to do this. Yet he was able to adapt and overcome. He did some Tai Chi, camped in his back garden and cycled 32km – the distance of the ‘Tougher’ route. We’ve awarded Andrew this award because of his resilience and his determination not to give up, which resonates well with our values as a charity. 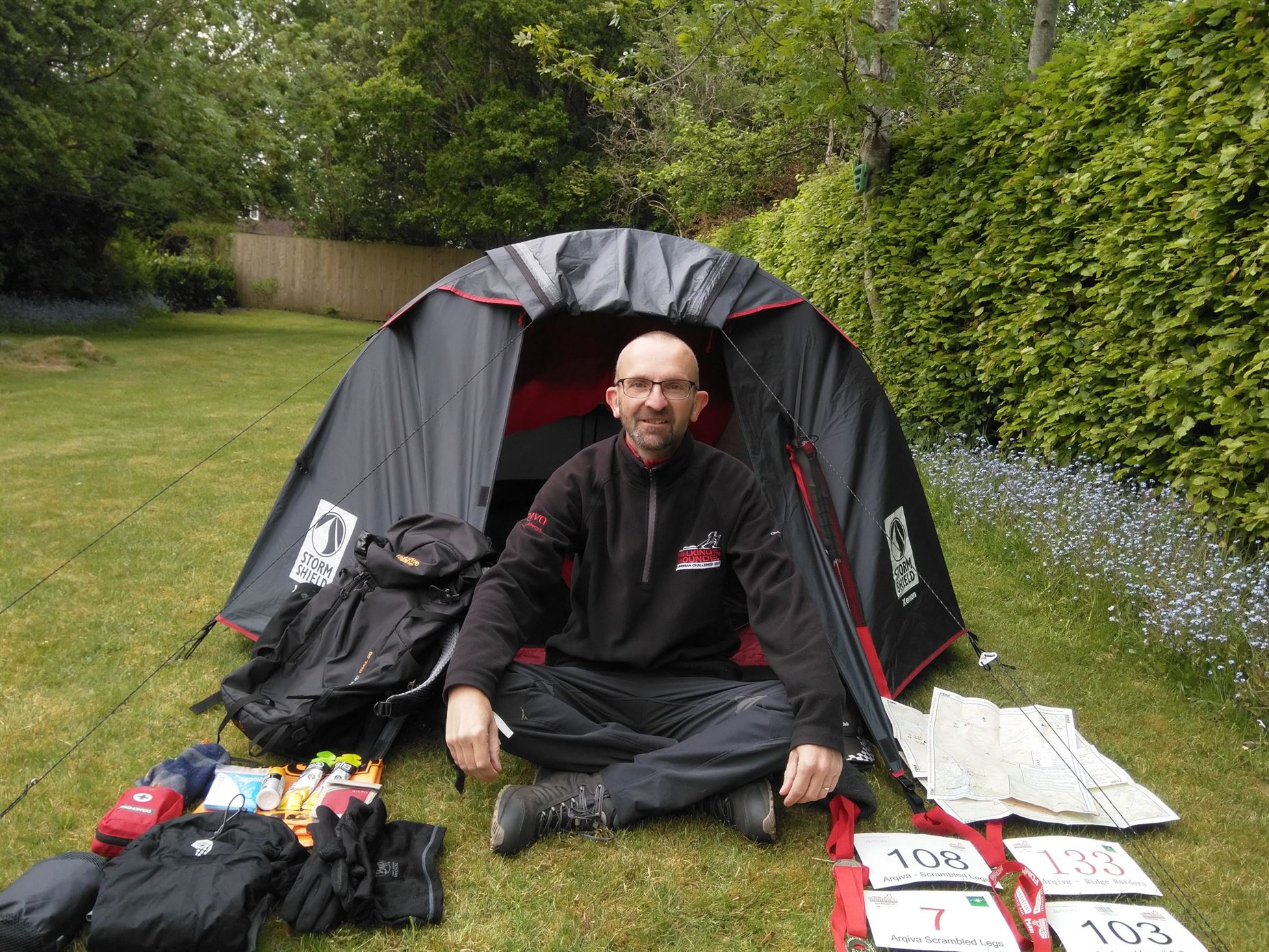 Many photos were sent in and the competition was tough, but there could only be one winner for the best photo, and it had to be Chris dragging himself through his front door after running 10km (including running up the big hill near his house 10 times)! Rhodar, a Leeds-based firm specialising in asbestos removal, demolition and remediation services, are also new to supporting the charity this year and have two teams taking part. 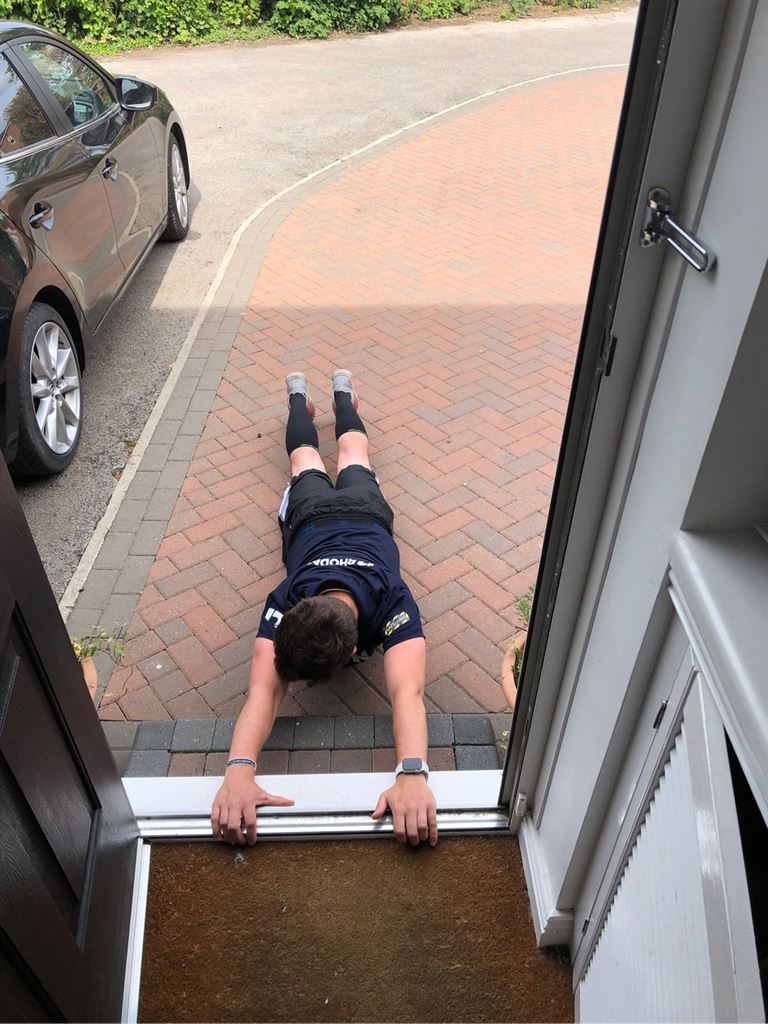 Once again, THANK YOU to everyone who took part in the #CumbrianChallengeAtHome.

Any teams wanting to set themselves a fitness challenge together or independently (in line with all social distancing rules) can still take part and use the idea as a means of edging towards their fundraising targets over the summer as we warm up for October.

If you’re not signed up to the Cumbrian Challenge then you can get involved and do it at home by creating a Facebook fundraising page. Or better still, sign up to the main event: www.cumbrianchallenge.org

Thank you. Your support saves lives, homes, relationships and jobs.