Making a difference in the community

Last summer, volunteers from Project Nova’s Past & Present Programme were tasked with restoring a WWII grave ahead of VJ Day celebrations on August 15th. The Past & Present Programme, funded by Positive Pathways and the Armed Forces Covenant Fund Trust, is involved in the surveying, photographing, and general garden maintenance of scattered War Graves in the UK.

The work has considerable value to historical records, and the programme works in close collaboration with the Commonwealth War Graves (CWGC). The CWGC was contacted by the daughter of a Far Eastern Prisoner of War, who contacted them to gain access to her father’s grave in readiness for VJ day on August 15th, 2020.

Sadly, the grave was a Private Marker, owned by the deceased’s family, so it did not fall under the control of the CWGC, who approached the Past & Present programme to see if they could assist in clearing the site so that the daughter could pay her respects to her father and that the grave could be tidied. She attended the site on the day of the clear-up and was moved by the work the team had done to restore her father’s grave.

The church concerned was Christ Church Cemetery, Bilston, West Midlands. This was the grave before the Past & Present team and the RFEA – The Forces Employment Charity began their tidy up: 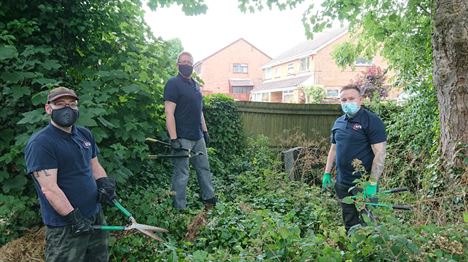 This is the headstone and site fully cleared – the clear-up also uncovered 7 other graves that had been overgrown with vegetation. 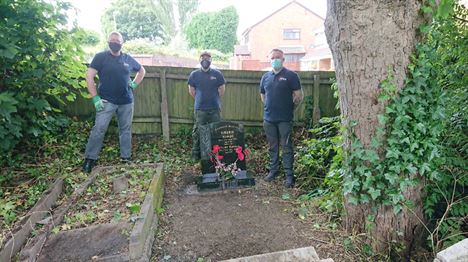 As soon as the team packed up, they had a visitor to the headstone, we all know of the old wives’ tale about Robins, a symbol of rebirth, and a sign of a visit from a lost loved one:

Find out more about the Past & Programme here