Ex-serviceman John is joining the Walk Of America...

John Mayhead served in Iraq in 2005 as a company commander in the Coldstream Guards. In the years that followed, he developed PTSD which led into chronic depression and anxiety. This is his story of illness and eventual recovery, leading to his place in this year’s Walk of America. 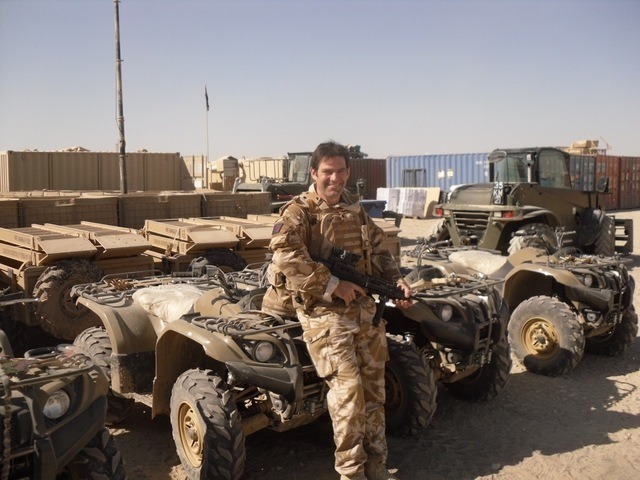 Strangely, it wasn’t the obvious trauma that most affected me. The horrors of war - luck separating the unscathed and the maimed, dead friends, wounded children - these are the awful reality of combat but one that my Army training had prepared me for since the day, aged 19, I had joined.

No, it was the other, more insidious trauma that caught me out. Like a bully who waits to pounce when you’re least expecting it, I found myself blindsided by other stuff: month after month of deploying on immediate ‘notice to move’ – Army parlance for having to react without warning or preparation to any incident. If something went bang in the northern half of Basra in the summer of 2005, I was the person in command of the incident. And, in the midst of what was effectively a civil war, there were lots of bangs.

Ironically, it was a fight I thought I had won. Through exceptional hard work, huge amounts of professionalism by them and more than a little luck, my company of 105 soldiers had all survived the tour. As infantry soldiers in that environment, when we’d dealt daily with bombs, rocket attacks and shootings with scores of other casualties, it was an almost miraculous statistic. Sure, there was a fair amount of emotion that came out of me once we’d returned to the UK, but I dealt with that in the way soldiers have for thousands of years: I got drunk with the people I had shared the experience with. After a couple of months, I thought that was it.

But that wasn’t it. Anger was the first symptom. Pure, unadulterated rage flowed out of me. It was triggered by the innocuous: a printer playing up; someone cutting me up in their car; even somebody stepping out in front on me on a busy pavement. At home, the rage sometimes spilled over; one afternoon I let out my anger on a chair, smashing it to pieces in my spare bedroom. Sleep became difficult – at night the demons came out to play, and as a result I came to fear the darkness.

Other self-destructive actions followed: I remember driving down dark country roads, taking my hands off the wheel, closing my eyes and pushing my foot on the accelerator pedal. At that point it wasn’t suicide I longed for, just to tempt fate; almost to see if survival in Iraq meant something. I also found myself yearning for revenge against the faceless enemy who had killed and maimed so many. I applied for another tour in Afghanistan, keen to fight again, this time with the gloves off. Fortunately, the application was denied.

Finally, in the summer of 2006, my family convinced me I needed help. Ironically, I’d been advising many of my soldiers to seek medical advice for mental injuries, but shied away from it myself. I was worried about the stigma attached to mental problems and, in a term that would come to haunt me, felt as a commander I ‘should’ be able to cope.

I was given three one-hour therapy sessions with an Army psychiatrist, put a sticking plaster over the gaping wound in my head, and once again thought I was better. I wasn’t.

Over the next few years I went from stratospheric highs to self-destructive lows. After another short tour in Afghanistan in 2009 I left the Army, but that didn’t solve anything. Now on anti-depressants, I lost my job, house, and a friend to cancer within a two week period. Even my dog dropped dead; the world seemed stacked against me, and as a result I ceased to function. I’ve always wondered what people meant by ‘having a breakdown’; I now know. With two tiny kids, my wife carried me and I came to rely on her totally. We found a new place to live and started again. Still afraid deep-down of the stigma of seeking NHS help, I paid for private counselling. It helped, a bit. I found a job as a writer, doing something I have always loved, and helped facilitate a programme for Help for Heroes. I felt my experience was helping others, and for a while all was good. I didn’t realise at the time, but although I was helping other veterans, I was also taking on some of their burden and from time to time I found myself unable to cope. Anxiety and depression took over. With Help for Heroes’ support, I had counselling and started a course of cognitive behavioural therapy (CBT) with my local NHS mental health team. Again it helped, but again it was temporary.

The big change in my life came in 2017. Last summer, the pressures of work, life and what was finally formally diagnosed as PTSD, combined to tip me over the edge. My lowest ebb was sitting in a lay-by, unable to reach a friend who had until then been my lifeline. I didn’t want to kill myself, but didn’t want to put my family through any more pain. I rang the Samaritans. The guy on the other end of the line did what that wonderful charity does best: listened with a sympathetic ear. After a while I felt strong enough to go home.

A few days later we went to stay with a friend. He’s been through a huge amount of trauma, both in the Army and in his personal life, and he gave me a book that fundamentally changed me: Go Wild! By Dr John Ratey and Richard Manning. It made me, for the first time, consider all the elements together: mental and physical health, diet, the importance of family and friends. I finished the book in a day, and decided to change what I could. I stopped eating refined sugar, or as much as that is possible these days. I cut back my carbohydrate intake to those in fresh vegetables and fruit. I then put on my trainers, and in the middle of a rainstorm, went for my first run in months. A couple of weeks later, my wife told me about a documentary she had seen on the power of cold water immersion to help people with depression. I searched for it and stumbled upon a University of Portsmouth team who are researching just this, and who hold weekly sea swims. In early January, with the sea a balmy 6 degrees C, I took my first dip. I still try to swim weekly, and cold shower every day. In a few weeks I’m running my first trail marathon in 17 years and have entered an ultra marathon in October. I’m about 15 kilos lighter than I was in October last year, and feeling great.

I now see my diet, running and cold water immersion as my three ‘meds’. I take them daily and will do for the rest of my life. I’m not taking away the amazing professional support I’ve had, but I know that these things are within my own power: it gives me an edge over the mental health bully.

By March 2018, with my moods much more stable, my mental and physical health much improved, I received word of the Walk Of America run by the charity Walking With The Wounded, who help vulnerable ex-Service personnel. I needed a challenge to test myself, went for an interview, and was duly offered a place. At the beginning of June, I will fly with the team to LA, then spend two weeks walking a couple of hundred miles through California and Texas. I’ll then leave the core team to continue on: six wounded ex-Service people from the UK and US are walking more than 1,000 miles over a 14-week period, with the aim of highlighting the complexities of dealing with military mental health problems.

And, as the charity’s patron, Prince Harry, recently said, it is a complex problem. One of the issues I wrote about earlier, the feeling that you ‘should’ be able to cope, is one of the biggest stumbling blocks. It stops so many people coming forward and seeking help, or delays their recovery. If I had been shot in Iraq, I wouldn’t have considered trying to deal with that injury myself. The sooner we see mental health problems as wounds that need professional help to deal with, then the sooner people will get treatment.

John meeting Prince Harry at the launch of the Walk Of America in London in April 2018.

Since I’ve started talking about my own journey, I’ve been amazed by the other people who have admitted they have had similar problems, or that they’ve lived it through their brothers, partners or friends. From my own experiences, I’ve seen that these are illnesses that can develop and grow over many years, only coming to a head sometimes decades after the person has left the Armed Forces.

Charities such as Walking With The Wounded and Help for Heroes do an amazing job in supporting those people, but without daily news reports of physical casualties from the war zone, they have dropped in people’s consciousness and are not as financially well-supported as in previous years. Hopefully, by our Walk Of America (with a little help from our royal patron) we can change that.

John will be joining the Walk Of America Expedition Team in LA. Please follow and support the expedition here.

The walk might be over, but that was just the beginning. Read More

Prince Harry has a message for the team

All the way from London, the team's UK Expedition Patron sends this message... Read More

"Physically, I have pushed my body to the limit". Read More

Have you heard about the D-Bird? Read More